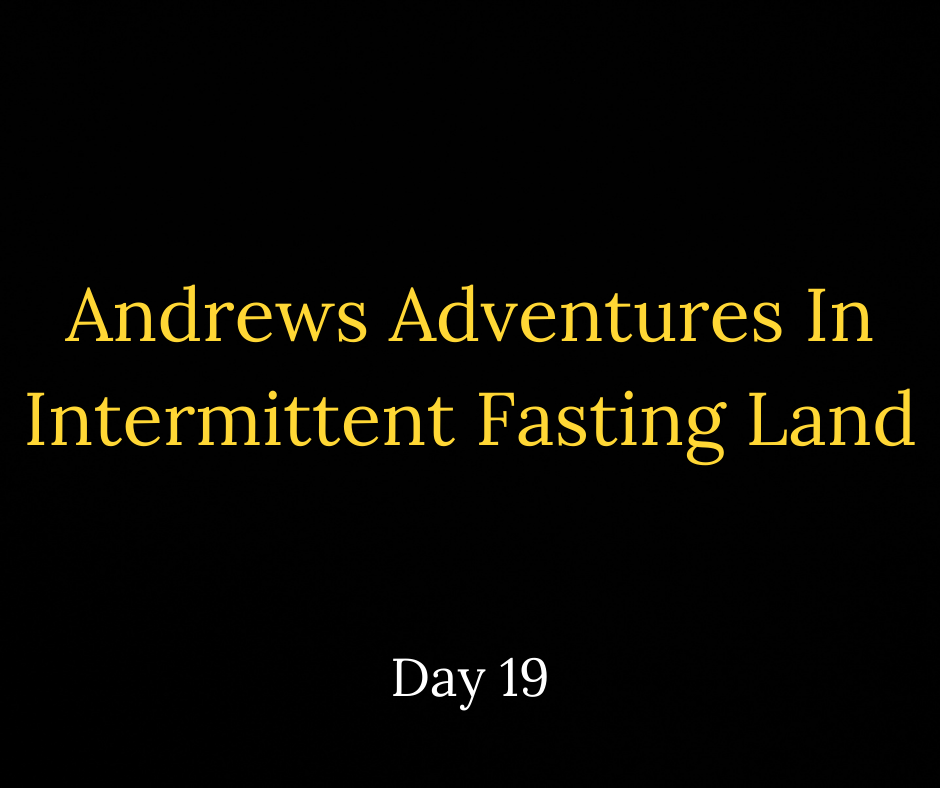 Update on the 19th Day: I love to experiment with different things. So of course I decided to experiment with this and I have not had popcorn for many months, and no grain products for much longer now as I chose to take them out of my diet because it’s in the same family of things not to eat right along with wheat, rye, and oats. They all belong to the Poaceae family. The human body is simply incapable of digesting these without long-term and short-term bad effects. Read the book “ Wheat Belly” for starters for more information.

I have been raving about 6th gear and running on all 12 cylinders as you know. Well I had about 8 or 9 handfuls of popcorn along with an ice-cold ginger ale. Can’t be that bad right? About 15 minutes later I started to feel just wrong. My stomach felt like I had eaten an anchor and it felt like I had drank about four beers in quick succession. It was like a fog settled into my head. I am going is this really happening? So I left the rest of the bowl of popcorn and that was that. I went back to my testing, just to confirm where I am mentally and physically, which consists of playing a video game that I play and am rather good at that takes strategy and fine motor skills. And guess what? Surprise, surprise, my level of play was noticeably down. Egad!

The next morning… I woke up and sixth gear was not there and I felt groggy and it took me a while to actually come out of my morning fog. Houston, we have a problem. I felt like Superman after being in a room full of kryptonite. My super powers had vanished. What the heck? So around noon I started to feel better, but not nearly up to snuff as I have been since I started this journey.

Day 20: Okay so by noon I’m starting to feel little bit better but definitely not anywhere near where I was before. Had to go to a meeting with a business associate and while having a discussion and they ordered a glass of wine. I said what the heck, might as well test this out as well. Over the course of 4 hours I had 3 glasses of wine. I had a fairly normal meal for my fast, high on oils, and fats, with protein and some spinach thrown in for good measure. I also tried a handful of popcorn and boom. 15 minutes later I felt icky. Definitely a correlation there with the popcorn and for sure with the vino.

Now this was yesterday so I’m really on Day 21 as I write this. I will have to categorically say that I will never repeat that part of the experiment again, but it does remind me of the way that I used to feel. There is no way that I want to go back to feeling like this. I did not start in sixth gear this morning, but it wasn’t as bad after eating popcorn and a pop at about 9 o’clock PM on Friday. However not that I was ever a big drinker before, I do not see myself drinking alcohol for the foreseeable future. Not loading up on carbs especially popcorn or any whole-grain products either. And perhaps it was because I’ve been feeling so good for several weeks now that the differences were strikingly noticeable. I have to tell you I felt like a zombie yesterday and I could not get out of what is now 2nd gear but used to be my 3rd or 4th..

I had big plans for Day 31 as I was going to celebrate and eat a pumpkin pecan torte that I’ve made and stuck in the freezer and do a couple of shots of Patron. But I will not be doing that. I may have one bite and seriously doubt I will be drinking a couple of shots. The enjoyment I got from eating and drinking is in no way shape or form worth it compared to how it messed up my whole day.

To think that I went around like this for years was such as waste of life. Sometimes you need to prove a negative just to reinforce your intuition. Because it can be somewhat difficult when you don’t do things, because the negative consequence is avoided and you sometimes wonder if you are right in not doing that and would it really have happened like you thought?

The answer to this one is an unequivocal yes. Unless something pops up with the other people that have been doing this for a lot longer that they have not mentioned, I will not be going back to 3 squares a day if I can avoid it. Because it literally both mentally and physically turns you into a zombie and I never even knew it.

I am trying not to think about this too much because when I think about that fact I had supposed experts telling me from the time I was a little kid that I needed to eat three squares a day, that I need to eat my bread, I needed to eat my vegetables, that cereal was okay for me, and all of the other crap that was pushed on me by the advertising mafia and the very people in public positions who supposedly had my best interest at heart and instead we’re point in fact keeping me a mind numbed robot makes me steamed.

Excuse my language here, but you rotten bastards. Now think about that and tell me how that makes you feel when you figure out that everything you’ve been told about how to eat healthy and dieting was and is an outright lie and in fact not in your best interests at all???

There I feel better now that I got that out! The ironic result of this experiment is that the pop and the popcorn made me feel worse than the wine. This makes sense as the alcohol can be quickly processed out of your system in just a few hours, whereas the other two can’t.

Onward we go and lessons learned for sure. As soon as I get my keto meter to work, I will be going back to Ketosis. I just feel better when I am in it!