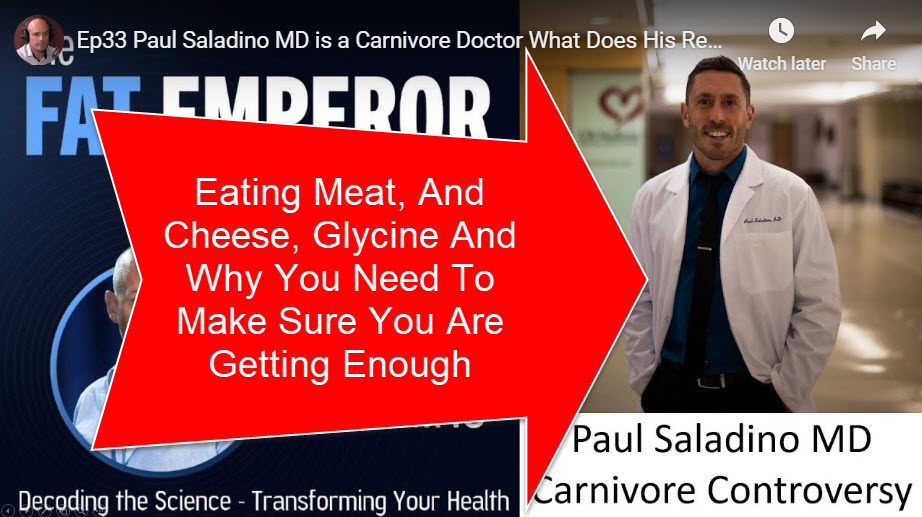 Eating Meat, And Cheese, Glycine And Why You Need To Make Sure You Are Getting Enough

IT IS NOT THE MEAT, IT IS THE RATIOS AND IF YOU ARE GOING CARNIVORE FOR A DETOX OR AS YOUR DIET, THIS IS A MUST READ!

Wait for a few seconds here, but Ivor Cummins and Dr. Saladino get into the hypothesis that eating too much Cheese and Meat ages you.  This is why I supplement with Glycine!  Here is a link to the one that I use.

You may have heard of mTOR and how eating too much meat activates and therefore ages you.  It comes out that they may have had it all wrong! Go figure right?

Here are the relevant parts.

01:17:45 Well, what you dig into there is this biochemistry around the methionine/glycine balance and the idea that subsequently, when they restricted the methionine in the mouse’s diet, they got the mouse live longer.

They said, “Ah, see, here’s the thing. Protein ages us. Methionine ages us.” And I think this is his argument that animal protein is higher in methionine than plant protein. Well, this is a misunderstanding of the data. What was really going on there was that by over feeding the animals in methionine, they were in balancing the methionine-glycine ratio.

“And when they gave the animals a robust amount of methionine, it just gave them glycine at the same time, the glycine extended the lifespan of the mice. So it was the methionine-glycine ratio.”

01:18:26 So to say that an animal protein that is high in methionine is going to shorten your life is to completely misunderstand the biochemistry around methionine and glycine ratios. And this kind of goes back to nose to tail eating. One of the things that I say to people who are thinking about a carnivore diet, or or who are eating a lot of meat in general, is that meat is a high methionine food. That you must balance that with high glycine foods. These are the connective tissues of an animal.

This is the idea of nose to tail eating, that we must balance methionine and glycine in our diets. And we’re not mice, but our biochemistry is pretty similar.01:18:58 And so Gundry is misinterpreting the studies here by saying, “Hi methionine, muscle meat is going to age you.” That’s bullshit. It only happens that way if you don’t get enough glycine in your diet. And like I said, there are some really remarkable studies, I’m happy to pull one up and tell people the name of it.

There are some really remarkable studies that show that when you actually supplement the diet of a mouse with glycine, they get life extension. And that’s really the issue here. That it’s the methionine-glycine balance that we need to think about rather than the amount of methionine.

Ivor 01:19:34 And actually Paul, I’m glad you went through that because I had heard about the ratio before and that was the explanation for these. And Valter Longo is another guy who’s strongly anti animal foods generally, and the similar arguments that protein drives diabetes and cancer. And I think all of it is, there’s misunderstandings in there as you’ve described one of them, but there’s probably more as well. Yeah.

Paul 01:20:01 There are many misunderstandings, yeah. Valter Longo is I think misunderstanding the equation as well. It’s a disservice because animal foods are so rich in nutrients, and people are limiting them, they’re going to develop nutrient deficiencies. I’ll just mention this paper to people because it’s so striking. That paper is called Glycine Supplementation: Extends Lifespan of Male and Female Mice. It’s in aging cell. It’s September 28, 2018.

So people can look up that study as well. It’s just a striking demonstration that… and this is sort of what really frustrates me about the people talking about this is they’ll say this on podcasts and then they never share their data. But if you actually nail them to the wall there, they’re talking about mouse studies with excess methionine. And they say, “Oh, that’s been disproven.” Like, you just need to look at the glycine studies to show that. And actually, from my perspective, it’s beautifully symmetric, because it reflects back to ideas around eating nose to tail and getting enough glycine, a balanced from methionine. So the idea is that Gundry is suggesting around the animal foods, aging humans, they’re just fallacy. It’s such a shame that he’s saying this. And then I would also say that he is underestimating the impact of lectins in many foods.

Ivor 01:21:15 Yeah. Fair enough. And what about the cheese though? I think I always suspected, with ApoE4 people who have metabolic issues and sensitivities, and maybe extensive heart disease, it’s always been cheese and animal products – cheese, and fat and protein. And I’ve met a lot of people and discussed with them this, and if you isolate a cheese, which has the casein and other challenges from the animal foods with the ApoE4 patients that he’s dealing with, I wonder, is cheese carrying a large part of the can for changing inflammatory markers? Because cheese in fairness, what do you think about cheese in general? It can cause reactions, it can cause issues. And maybe that’s what’s causing the effects much more so that they do appear to see.

Paul 01:22:12 Yes. This is the problem with nutritional research. Now, if people will follow me on Instagram, they’ll know that I’m not a huge advocate for dairy for exactly this reason. You know, some people do seem to tolerate dairy, but just like egg whites, you know, there are animal products, not usually not muscle meat, you know, but egg whites and dairy are animal products that do seem to trigger immunologic reactions in people.

And ultimately, inflammation is an immunologic reaction. I agree with you here. I have concerns about the immunogenicity of casein and whey specifically A1 versus A2 casein. And the fact that casein can break down into case of morphine, which is an opiate like compound found in dairy, which can change satiety signaling and all these things. And so yes, these nutritional studies are badly constructed and that they often will combine heavy cream, and they’ll use heavy cream or a milkshake or a milk product as the source of either saturated fat in these ApoE4 studies or the source of the fats in these studies.

01:23:15 I’ve never seen this study with tallow. I don’t think most researchers in the company in the country understand tallow, you know, they don’t even know what tallow is. It’s just a rendered animal fat. And I’ve never seen research with people just eating steak. That’s not an intervention.

But, you know, if you look at the ApoE stuff, I think it’s a complex equation. But yes, I think that it’s confounded by the fact that for some people, dairy may be particularly immunogenic and what we’re seeing there is a signal related to the immunogenicity of the proteins and dairy rather than anything related to saturated fat. And this kind of segways into discussions around saturated fat, lipopolysaccharide, endotoxin. You know, there’s a lot of people talking about this right now. And I think that the data here is also very confusing.

But if you look at the studies in increased levels of endotoxin, increased levels of LPS (lipopolysaccharide) and feeding of saturated fat, you really have to dig into the study to see what type of saturated fat people were actually fed. And almost invariably, it’s dairy. They’re getting heavy cream, they’re getting dairy fat, which brings with it casein and whey and other immunogenic proteins. And so the question is, “When you’re feeding someone dairy and you’re seeing an increase in postprandial lipopolysaccharide, is that due to the saturated fat and dairy, or is that due to the casein and the way causing an immune reaction in the gut potentially triggering leaky gut in these people?”

So it’s a very complex equation. Researchers are too hasty to blame saturated fat, because that’s the story that everybody wants to make, even though it doesn’t seem to be very clear, when we look at lots of studies, it’s not clear at all that saturated fat is bad for humans. In fact, in many cases, there’s no evidence of that.

But the researchers just want to blame saturated fat. It’s like there’s this bandwagon to blame animal foods, and a plain saturated fats, anytime they can get a result suggests that they jump to that conclusion without really thinking at a much more granular level, and thinking, “Oh, they’re all these other proteins in milk.”

Nobody’s actually giving a single saturated fatty acid a very pure experiment. Nobody’s giving tallow or, you know, these things. There are some experiments with coconut oil, which look a little different than the dairy experiments.

You can also get more great information like this over at The Fat Emperor.

Here is a link to the Study below.

Glycine supplementation extends the lifespan of male and female mice

Glycine supplementation extends the lifespan of male and female mice

This is the Glycine supplement that I take daily.
NOW Supplements, Glycine Pure Powder, 1-Pound.