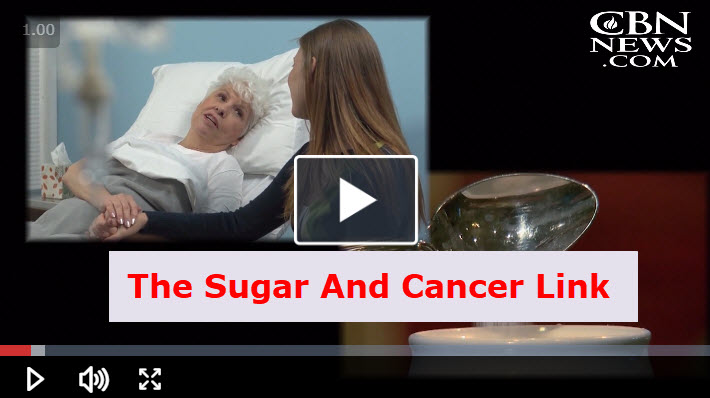 Wendy 0:06
Scientists believe two thirds of all cancers are caused by our own bad choices like smoking and not exercising and the granddaddy of them all. A poor diet because what you eat can literally kill you are see the news health reporter Lori Johnson tells us about the dramatic link between cancer and sugar.

Lori 0:26
A clear relationship between sugar and cancer lead scientists to two conclusions. Sugar use contributes to cancer and going without it can slow growth of the disease. 100 years ago, most folks consumed only four pounds of sugar a year. That’s this much.

Now however, the average person takes in 40 times this amount 160 pounds of sugar a year. That’s this much. food manufacturers add enormous amounts of sugar usually in the form of high fructose corn syrup to products we consume all day every day. coffee drinks and cereal, soda and snacks.

Even foods you wouldn’t expect like spaghetti sauce and peanut butter. This tiny container of yogurt contains more sugar than a candy bar. Now scientists tell us sugar directly influences cancer cells, the amount we consume can either feed those cells or starve them. In a landmark study, researchers at UT MD Anderson Cancer Center fed mice high fructose corn syrup in percentages equal to what many humans consume.

Those mice develop higher rates of lung and breast cancer compared to mice fed less sugar. The study also tells us something about people who already have cancer. One researcher said a lot of patients are told it doesn’t matter what you eat after you are diagnosed with cancer. This preliminary animal research suggests that it does matter. And it just absolutely amazes me that medical science is just now finding this out.

Fred Hatfield knows firsthand sugar intake matters after a cancer diagnosis. Back in 2012. His diagnosis was basically a death sentence. The doctors gave me three months to live because of widespread metastatic cancer in my skeletal structure. Three months, three different doctors told me that same thing. It’s a horrible, horrible feeling to have someone tell you that the person that you love only has three months to live and you’re not going to be with him anymore.

Then Fred heard about a low sugar diet called the keto genomic diet, believe to slow cancer and some people with nothing to lose. He gave it a try. And to his astonishment, it worked and the cancer was called completely.

Fred’s recovery didn’t surprise Dr. Dominic D’Agostino. His team at the University of South Florida discovered mice with highly aggressive metastatic cancer continued living when fed a ketogenic diet, we have dramatically increased survival with metabolic therapy. So we think it’s important to get this information out. And it’s not just lab animals. Dr. D’Agostino has seen similar results in humans. I’ve been in correspondence with a number of people, probably at least a dozen people and over the last year and a half to two years and all of them are still alive.

So despite the odds, and so this is very encouraging. The ketogenic diet means no sugar and no starchy carbohydrates like bread and pasta that convert to sugar. D’Agostino says cancer cells love sugar and starch, because cancer thrives on the glucose from those foods, remove the glucose and starve the cancer cells. Glucose also feels our healthy cells. But if it’s not there, those cells can switch to an alternate fuel source called ketone bodies. Cancer cells only run on glucose.

People following the ketogenic diet tend to cook Whole Foods from scratch. You can go online and there’s just cookbooks and you know it’s not it’s it’s clean eating just very clean eating none of the sugars, the salts, the you know, the the trash food. So when it comes to cancer, sugar is considered public enemy number one, avoiding it could lead to prevention, or slow it down in people fighting the disease. Lori Johnson, CBS News.

Wendy 5:08
And our health guru Lori Johnson joins us now to talk a bit more about the link between sugar and cancer. Wow, fascinating piece that that guy. He said no cancer was completely gone. So it is possible for some people to overcome cancer by just getting up the sugar slowly. And you quoted a study in the piece. Are there any other scientific evidence is that this is the case.

Lori 5:31
There are as a matter of fact, there aside from the study, they quoted in the video to pay videotaped fees we just watched. Also, a group of Australian researchers concluded high levels of insulin, which is released when you eat sugar can cause breast, prostate, endometrial and pancreatic cancer. So whether you’re interested in preventing cancer, or reversing it, just remember three key words. Sugar feeds cancer, man,

Wendy 5:57
that’s, you know, well, it’s good that we know that. But it’s kind of like, man, do I have to give up all the good stuff? Because really, I mean, that’s what you’re saying it because it’s the weakness. Sugar is the weakness that feeds the cancer.

Lori 6:12
That’s right. And it’s great that we can exploit that that we know that that cancer cells thrive on sugar. As a matter of fact, cancer cells uptake sugar 10 times more than regular cells. But the real secret is, cancer cells only have glucose receptors, whereas regular cells have both glucose and ketones receptors. So we can literally starve cancer cells by depriving them of sugar and our other cells will be just fine.

Wendy 6:41
Well, we know it means giving up the cupcakes and the soda pop. But what about the hidden sugars? Like you know, it yogurt? I avoid most yogurts because they’re just so much sugar,

Lori 6:54
right? I’m glad you mentioned yogurt, I actually brought a yogurt with me. And this looks to most people like like a really healthy choice. I mean, it’s non fat. It’s a Greek yogurt, right? This particular yogurt contains five teaspoons of sugar. A little it is the way you know how much sugar added sugar is in a product. As look, it’ll tell you on the label. And this is in grams, it says 20 grams of sugar and a lot of people are thinking what’s a gram I don’t know what that is. There are four grams to every teaspoon Sophie of 20 grams of sugar, then you know that that’s five teaspoons. So four grams equals one teaspoon. I don’t

Wendy 7:31
even think that tastes good. It To me, it’s like that’s too sweet, you know, but the American palate. That’s how they market it the best way

Lori 7:37
a lot of folks love yogurt and it is good. In some cases, the best way to choose it is the plain yogurt, the Greek is good, and then just add berries to it to sweeten it. You know hidden sugar is in most processed foods, one of our producers Andrew, your Garrett, your friend of mine, she was just at home cooking.

And really, this is consistent with a lot of low salt or salt free seasonings or foods because when you take out the salt, you lose a lot of flavor. And so manufacturers add flavor back by adding sugar to it. Same thing with low fat products. If you take out the fat, then you’re losing a lot of the flavors.

Wendy 8:35
know you and I were always saying before it was cool to say fat we were saying fat is your friend sugars or foe. And then all these studies came out so you know we really started this trend. That’s

Wendy 8:48
what was shocking. In the piece that you just did was that 100 years ago, you know one bag of dominoes sugar, one pound bag was what they would have in a year. And now we have like 16 pain of those here.

Lori 9:01
That’s 100 years ago, people only ate cake when it was someone’s birthday and all those tiny little plates. It’s just really crept up. We know that there’s a lot of just these two pieces of white bread contain almost an entire teaspoon of sugar. So yeah, look at my labels, right. You know, you look at the labels, and the first ingredient is flour and then the ingredient right after that is sugar and to a

Lori 9:32
Yeah, sugars a drug. It makes everything taste better, is it?

Wendy 9:37
I mean, I guess it’s not a drug. Exactly. But it acts like a drug because it’s very addictive. Absolutely.

Lori 9:43
Yeah, no doubt. So consider when you’re eating. When you’re choosing products at the store, stay away from the refined carbohydrates, refined carbohydrates or the white flour products like bread, bagels, the flour tortillas, and begin the reason those are bad is because the fiber has been removed almost entirely, or at least partially,

Lori 10:09
If you want to eat grains, then definitely choose the whole grains. And you know, fruits and vegetables have our carbohydrates, but they have the fiber. But you know there are high sugar fruits and vegetables. The low sugar ones are the ones you should choose if you’re really trying to watch the sugar. berries are the low sugar fruits, right things like apples and bananas are really high.

And most vegetables are low in sugar. Although white potatoes and corn and peas and carrots are kind of I did something last night that that you do that I’ve not done in a long time I made my own salad dressing

Wendy 10:46
and I put a big hunk of raw garlic, some ginger, olive oil and the apple cider vinegar and a little bit of pepper, dash assault. And it was interesting it was it was pretty I’m kind of thick but boy do I feel good today. And there’s something very potent about that. You know that garlic and the ginger and all those things that an olive oil, you know, sounds really good. But I sit right next to Lori so I can’t get away with anything. People have their

Lori 11:20
junk food and they see me coming they sort of run it in the other direction because I’ll be wagging my finger.

Wendy 11:26
We do appreciate it. You’re gonna help us all live a lot longer. So Lori thank you and if you would like more information on the links between sugar and cancer, you can get it by logging on to see the end. news.com glory thanks. My pleasure.

Isn’t it great how they explain the link between Sugar, Cancer, and the Keto Diet?

This is one of the best videos I have seen that explains why you want to go on the Keto Low-Carb diet.

Dr. D’Agostino is one of my favorite docs as well. One sharp cookie for sure.

If you liked this video, please comment below and share with anyone that you love or at least like. 🙂 Oh and sign up for our newsletter for more great information like this. Lori Johnson is also one great reporter and I thank CBN for making this shareable.